Nice wrap-up / look-ahead for the Spartans by The Only Colors‘ Chris Vannini (link below).  And there are some nice videos to get the Spartan football juices flowing.  I pretty much agree with Vannini’s take on the State of MSU football which isn’t surprising becuase throughout the year I enjoy reading his posts.  Bookmark The Only Colors, you’ll be glad you did. 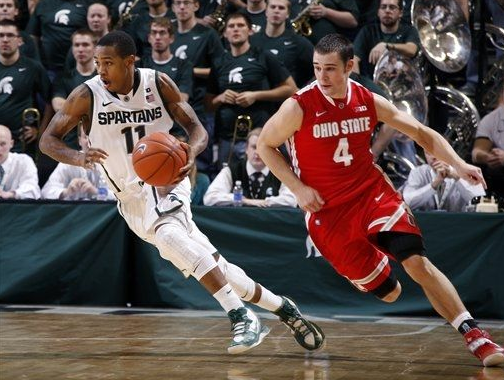 When it’s a big game and when it is the biggest recruiting weekend of the year.

Beating #11 Ohio State who just happens to be coming off a win versus #2 Michigan is a big deal. It was a really good game and Spartans played more balanced and consistent then I’ve seen all season. A great win.

And Coach Dantonio just happens to have 20 recruits on campus this weekend to experience the school and learn about what life as a Spartan will be like. Well, they got a great taste Saturday night as Breslin (I’ll just assume they were all there). Wow, a great game, a great crowd and a down-to-the-last-seconds finish. Boom! If that doesn’t resonate, I don’t know what would.

I’m a little late with this post but with the season now over I ‘ve been paying more attention to basketball and the NFL playoffs. Anyway, let’s close out the 2012 season rankings by taking a look at how the AP lined up after it was all said and done.

Up there in the rarified air is Ohio State at #3. Would they have been BCS Championship contenders if there wasn’t a post-season ban? We will never know. Our next highest B1G team is Northwestern moving up from #21 to #17 after their bowl win over Mississippi State. The news is not as good for Michigan as they fell from #19 to #24 after being beaten by South Carolina. Lastly, Nebraska tumbled a bit further from #23 to #25 after being smoked by Georgia.

Looking back at the pre-season rankings, it’s funny to see what the college football world was thinking heading in to this far-from-great season for the B1G. Did you think the Buckeyes would go unbeaten? Did you think Michigan and Nebraska would have so many ups and downs? I certainly didn’t think the Spartans were going to be an unranked, six-loss team. It was a crazy year.

Soon I’ll be clearing this chart off and creating the 2013 version. Who will be on that one in the pre-season I wonder?

Well here it is. The final chart to help you visualize how the B1G netted out this year. A few quick observations…

Ohio State was perfect but the post-season ban left them out of the B1G Championship game and without a bowl. They’ll be back in the mx next season though. Do you think they will have as good a year as they did in 2012? All I know is I really, really, REALLY do not like Urban Meyer. That guy is a douche and he doesn’t have the class that you would expect of a B1G head coach. But he wins games. Ugh.

How about Northwestern getting to double-digit wins and final ending their bowl loss streak? I like what Pat Fitzgerald is doing there and I hope they continue to play solid B1G football.

Boy did Nebraska ever shit the bed. 10-2 going in to the B1G Championship where they were absolutely humiliated by Wisconsin, and then they were fairly well schooled in their bowl against a very good Georgia team. Talk about ending on a low note.

Penn State had the year from hell leading up to the first kick-off and I have to say hats off to the Lions for turning in a pretty great season. I think it helped to heal the team, the school, the fans and the state. The NCAA sanctions are long-lasting so it will be years before everything is back to normal for Penn State, but I’m liking the Nittany Lions more now than ever before and I hope that they continue to take the high-road, not complain, and perform like champions on the gridiron.

South Carolina was too much for Michigan in their bowl but at least they had a good season (8-5) and they no longer have to figure what to do with the gift/curse of Denard Robinson. The Clowney hit continues to trend on YouTube – that was awesome. I only wish it was William Gholston how had delivered it. Good riddance to Taylor Lewan, I hope your facemasking tactics get your ass kicked in the pros.

And what a year for Wisconsin who made it to and lost their third consecutive Rose Bowl. And your coach bailed for where? Arkansas? I will say this, the Badgers absolutely crushed and destroyed Nebraska in the B1G Championship game. It was impressive. Who knows what the 2013 Wisconsin team will look like but at least your coach won’t be referred to as “Brah” any longer.

Oh my Michigan State Spartans. This was the woulda, coulda, shoulda year if ever there was one. Notre Dame shut the Spartans down again; we’ve got to fix that. And the winning streak against Michigan came to an end. The Spartans lost five B1G games by a combined 13 points. And even Le’Veon Bell wasn’t enough to offset one of the weakest air attacks that I’ve eve seen. The bowl win against TCU did seem to provide some healing and some optimism, but 2013 is a very big question mark. Who’s going to be under center next year? Who knows?

At the beginning of the year it looked like Purdue was going to be pretty darn good. And then they lost five in a row in the B1G. Ouch. The offense has come a long way but the defense just can’t stop the bleeding. And the bowl game was pathetic. Get it together next year Boilermakers!

And along the same lines you have Minnesota who just cant seem to get a quality win. By far the best game of the year was their near-miss bowl against Texas Tech. Let’s see more of that fight next year Jerry Kill and maybe we’ll put the “Golden” back in front of Gophers.

And for the rest, Iowa, Indiana and Illinois, this was just a bad, bad year. The Hawkeyes and the Hoosiers had some decent games but just couldn’t get it together. the Illini were just really, really bad. But there is always next year!

So the B1G suffered a bit this year. It was an off year in general and I really hope 2013 is very different. I’m going to predict a much improved B1G next year. I feel it in my bones. We’re due!

I can still hold hope that William Gholston will stay at MSU for his last year of eligibility. A guy can hope, right?

The 2012 college football season is officially over and done. 2012 was a tough season for the B1G and the bowl games were no different. Let take a quick look at all of the B1G bowl games and see how I did on my picks while we are at it.

Minnesota vs. Texas Tech – This ended up being a good game and the Gophers fought hard. We knew the Red Raiders had a dangerous passing game and that’s exactly what they used to tie it up with 1:10 on the clock. It looked like the game was going in to OT when the Red Raiders hauled in an interception, got in to field goal range and kicked an FG as time ran out. The Gophers didn’t win but they did show potential as Jerry Kill’s team took a huge step forward in 2012. I had Texas Tech by 17, they won by three. 1-0.

Michigan State vs. TCU – This was a game of two well-match teams that both have great defenses and less-than-great offenses. In the end, the Spartan’s defense never faltered and the Horned Frogs made a critical blunder when they muffed a punt on their own five yard line. Connor Cook ended up being the go-to QB which is likely to spark a QB debate throughout the off-season. Anyway, Michigan State squeaked this one out winning by one point on a late FG. I don’t pick the Spartan games so I stay at 1-0.

#20 Northwestern vs. Mississippi State -Here’s to Pat Fitz for snapping the longest bowl draught in college football! The Wildcats were able to convert 10 third-down plays where the Bulldogs could only muster one. That’s a tough equation to be on the wrong side of. Add that to a far better completion percentage in the air and Northwestern accomplished what they haven’t been able to do since 1949. I felt like the Wildcats were more balanced and I picked them to win by a score. It was Northwestern by 14. 2-0.

Purdue vs. Oklahoma State – I knew the Cowboys had a superior offense and with the chaos of a coaching change, I didn’t see the Boilermakers as having much of a chance in this one. Who knew that I was being overly conservative when I picked the Cowboys by 17. It was Oklahoma State by 44 (ouch). 3-0.

#18 Michigan vs. #10 South Carolina – I hate Michigan. I hate Taylor Lewan. I think Michigan has been a smoke and mirrors team all season long as they won close ones against mediocre teams and have gotten exposed against good teams. I must say that them came to play in this one and for most of the game (excluding the first quarter), they stayed in it. It was a physical game and typically I think of the B1G schools as being more physical than SEC schools, but the opposite was true this time. The Gamecocks just beat the Wolverines up. I called a close one but picked the Gamecocks by three. It was South Carolina by five. 4-0.

#16 Nebraska vs. #7 Georgia – MSU faced Georgia last year and it was a very tough victory. I think the Dawgs are better this year and feared that the Huskers just weren’t up for the challenge with their semi-one dimensional offense. I’ve said in the past that every time Martinez throws the ball, there is a 50/50 chance of it being picked off, and boy did that play out in this one as he threw two interceptions. Rex Burkhead ran the ball well, but that one dimension just isn’t enough, not against the SEC. I picked the Dawgs by 17 partially because I felt Georgia was better and because I had just witnessed Nebraska get utterly destroyed in the B1G championship game. It was Georgia by 14. 5-0.

Wisconsin vs. #6 Stanford – Well I guess it’s just a fact: Wisconsin can not win a Rose Bowl. They should not be allowed to participate for five or 10 years after dropping three in a row. Good God. Anyway, what a boring second half with the exception of the final three minutes or so. Both teams looked afraid or incapable of passing the ball after halftime so it was all run, run, run and punt for 27 minutes. I expected a bit more of Stanford and I was totally unsure of what to expect from Wisconsin. For this pick I really went with the B1G more than I went with the Badgers. I really, really wanted the B1G to win more bowl games and with the exception of Northwestern, I had picked all of the B1G teams to lose. I felt guilty so I fudged the numbers and took the Badgers by one. I was wrong. I would have been more surprised if I had been right. Damn. Stanford by six. 5-1.

Well, I guess I can’t win them all. I’ll take the Spartan win over TCU as a mega bonus and my hat if off to Northwestern for their victory over Mississippi State. To Purdue, Michigan, Nebraska and Wisconsin I say thanks for the effort but because of your losses we’ll all be eating crow from the SEC-loving media for the next year. I wish it weren’t so.